The European semiconductor industry shows no signs of slowdown in Q2/2017. According to DMASS, semiconductor sales as reported by the members ended with another record of €2.19bn Euro, an increase of 17.3% over the corresponding quarter last year.

For the first six months, DMASS reported over €4.3bn of consolidated semiconductor sales, 14% more than the first half of 2016.**

Georg Steinberger, chairman of DMASS comments: “As many market participants feel right now, the dynamic growth over the last nine months was unprecedented. The significant allocations in several product areas make it difficult to predict the rest of the year, but it would be safe to assume that double-digit growth will continue through 2017. DMASS Totals of €8bn, an all-time record, are in range for the full year. What is surprising, is the fact that the growth impact comes from almost all industry segments, driven by a higher electronics content across many applications.”

Adds  Steinberger: “If you look at the growth in Eastern Europe, it is mainly driven by production shifts from Northern and Central Europe. Positively surprising is the resilience of the Italian high-tech market against the domestic economic problems.”

At the product side, the growth is across the board, a sign for healthy market development. Other Logic (application-specific logic) and Memories have seen the highest growth rates, followed by Programmable Logic.

Analogue IC sales surged 16.7% to €656m. This is the biggest product group in DMASS and represents 30% of DMASS Total.

Says Steinberger: “Standing out from the crowd are memory and logic products in general, application specific logic and DRAM particularly. Programmable Logic is experiencing higher growth despite channel shifts from distribution to direct, but this could be seasonal. However, even without these very particular growth spikes, the distribution market in Europe shows very healthy double-digit growth. ”

“Looking forward remains difficult”, said Steinberger: “Lovely to see two-digit growth as record levels continue, but with the challenges ahead on the distribution channel – whether it is business model, margin pressure or regulatory influences – the outlook becomes teeth-grinding. I am sure distribution will master the aforementioned problems and turn them into interesting business propositions for customers.” 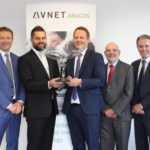