Charcroft Electronics position as an Express Hub for Vishay Precision Group’s (VPG) foil resistors is being strengthened by the two companies working together to implement new equipment that will increase capacity.
The investment means Charcroft will be able to support more volume with shorter lead times.
Charcroft is one of several Vishay Foil Resistors (VFR) Express Hubs, located strategically throughout Europe, Asia, and the Americas, that enables companies to source precision resistors locally with any specified resistance value out to six digits in a matter of days. These hubs trim and mould precision resistors just as in VPG’s central locations but are located close enough to VPG end customers to enable the personal relationships and up-close inspection of the product that distinguish artisanal from mass-produced products.
Yuval Hernik, senior director of application engineering for VFR commented, “It is not surprising that a growing number of customers in the UK prefer to source their precision resistors from Charcroft, which has been a familiar name and a trusted source in the British market for more than 40 years.”
Charcroft is a privately owned company founded in 1974 in Suffolk, UK. The company moved to its current location in Powys, Wales — where its offices, warehouses, and manufacturing facilities are located — in 1985. As a passives specialist, the company holds both distribution and manufacturing approval to BS9000 and IECQ-CECC, and it has been making Bulk Metal Foil resistors in the UK since 2003. Charcroft’s team of just under 50 employees, many of whom have been with the company well over 10 years, has a wealth of passives knowledge. 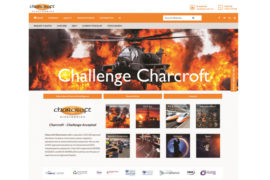