Nigel Ward has retired from the role of President, Avnet Abacus and will be replaced by another industry veteran Rudy Van Parijs. Ward leaves after  a successful 30-year career with Avnet. Van Parijs joined EBV Elektronik, an Avnet company, in 1991, as a field application engineer.

He followed this with a period at the University of Leuven in Belgium, working on machine vision, and a spell with a start up.

Subsequent roles within Avnet have seen him progress to head of EBV’s Belgian sales organisation, then as leader of the entire EBV Benelux region, and for six years he was in charge of the company’s technical organisation in Poing, Germany.

For the past eight years he has been at the helm of EBV’s South Europe region, driving business growth across Belgium, France, Italy, Portugal, North Africa and Spain.

Slobodan Puljarevic, President EBV Elektronik commented: “Rudy is highly qualified to step into the president’s role at Avnet Abacus and to continue the fantastic growth trajectory. He inherits a very motivated technical and commercial team, which is highly respected by customers and suppliers operating in the IP&E sector. We will give him our every support in this new challenge, and we extend our thanks to Nigel for the part he has played in building this successful business model.” 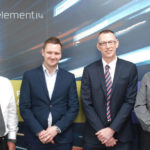