TTI, Inc., the global distributor of passive, interconnect, relay & switch and discrete components, has launched new CeraDiode arrays from Epcos which are used to protect several USB ports simultaneously from static discharges, significantly reducing the PCB space and logistics costs. CeraDiodes – ceramic components developed to provide ESD protection for data, audio and video lines as well as for ICs and interfaces – are not only a cost-effective alternative to other ESD protection components such as zener and TVS diodes, but also offer technical benefits. In many cases, a semiconductor diode can be replaced by a CeraDiode on a one-to-one basis without making any changes to the pad circuit layout.

Because high data rates of up to 480Mbit/s are transmitted via the USB connection, the capacitance of the ESD protection element should be minimized in order to avoid transmission losses and signal distortions. The protection function can be realized both by single and array components, the latter being preferred for reasons of space and cost saving. The protection components must additionally satisfy the international ESD standard IEC 61000-4-2, level 4. EPCOS offers CeraDiodes as single and array components that meet these requirements precisely.

CeraDiodes are bidirectional components. As such, there is no danger of positioning them in the wrong direction. All CeraDiodes also satisfy the requirements of the international ESD standard IEC 61000-4-2 levels 1 to 4, which involves testing the components within the human body model (330Ω/150pF). The ESD protection properties of the CeraDiodes are constant up to an operating temperature of 85degC, whereas semiconductor diodes will require derating from 25degC.

Thanks to their internal electrode structure, CeraDiodes offer not only ESD protection but also have a defined capacitance, or capacitor properties. This capacitance is type-dependent and can be used for filter functions. In this way a CeraDiode can replace not only a semiconductor diode, but also a capacitor, so one component may easily replace three. 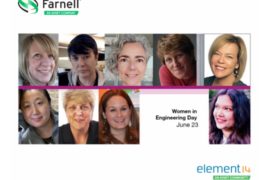