UK and Ireland distribution sales fell below market expectations in September.
According to ecsn Chairman Adam Fletcher, the recovery that usually follows the summer holiday season was not as strong as in previous years: “The UK / Ireland electronic components markets continue to be affected by the decline in global economic growth,” Fletcher said.
The Book-to-Bill (B2B) ratio declined further in September ‘15 compared to the previous month. Overall Bookings declined compared with August ’15 and compared to the same period 2014.
“The continued decline in the ‘Book-to-Bill’ ratio into negative territory reflects declining UK / Ireland economic activity,” Fletcher said. “The polynomial trend now suggests that the B2B will remain just below unity into Q4 ‘15.”
Inventory held by Authorised Distributors increased by 4% in September, probably as a result of pressure from manufacturers to shift inventory to their channel partners, but Fletcher cautions that actual customer demand is the key consideration for his members: “Authorised Distributors will need to keep these increased stock level under constant review.”
He attributes the global components inventory glut primarily by the slowdown in China’s manufacturing output and believes that it’s a trend likely to continue into Q1’16.
“Overall gross margins remain under pressure and below historic levels suggesting continued price erosion,” Fletcher said. “With no strong market drivers into the Christmas and New Year period components manufacturers will have to start reducing their manufacturing output in line with the revised global demand.”
ecsn will release its annual market forecast on December 3. 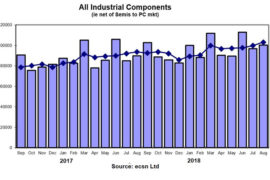 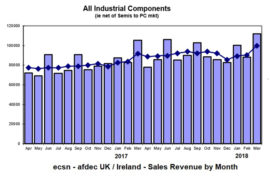