At last there is a welcome and promising sign of better times ahead for the distribution channel in Europe. Latest numbers from DMASS (Distributors’ and Manufacturers’ Association of Semiconductor Specialists) show a sequential market recovery of 16% in Q1 this year over the last quarter of 2012. Although Q1/CY13 ended 5% lower than the comparable quarter last year, the sequential development is extremely promising, says DMASS. Q1 ended with sales of 1.48bn Euro. Commented Georg Steinberger, chairman of DMASS: “I am sure that many market participants are relieved that the worst is obviously behind us. However, the 5% decline against Q1/CY12 clearly shows that there is still some risk in the market, particularly through price pressure and production shifts. At least, the booking situation has slightly improved, so that another year of decline does not seem too probable.”

In the Q12013/Q12012 comparisons eastern Europe and the Nordic regions take star billing growing at 1.2% and 0.8% respectively. East Europe is now a 160m Euro market and Nordic has grown to 153m Euro.
The UK market fell 3% YoY to 123m Euro in Q1 this year. France declined 6% to 108m Euro, Italy dropped 7.7% to 139m Euro and although Germany is comfortably the biggest European semiconductor distribution market it fell 9% to 478m Euro.

Georg Steinberger: “Arguably, at Q1 a comparison of regional shifts does not make a lot sense, however the over-proportional German weakness over the last few quarters seems to have come to a halt finally.”

Product-wise, the major segments developed within a reasonable corridor, between -11% and +13%. In detail, Programmable Logic declined by -11.3% to 130m Euro, while Optoelectronic Devices grew by 2.3% to 142m Euro. Analogue products, by far the biggest segment, declined 2.8% to 426m Euro, MOS Micro ended down 6.9% at 302m Euro, Sensors grew by almost 13%, Other Logic (ASSPs mainly), stayed flat, all other segments were negative.

Georg Steinberger added : “While most technologies are used across industry segments and participated in the general weakness (specifically Power, Discretes, Analogue, Memory and MOS Micro), Sensors and Opto stood out as growth opportunities, a trend that will continue for a while. Reason: end applications like Lighting are growth markets with lots of room for differentiation and engineering-supported market development activities. The same is true for Advanced Analogue technologies and Power Management.” 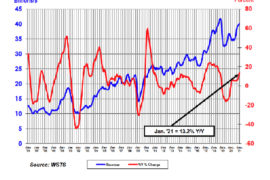