Bill Laughton the founder of Aerco and a pioneer of the UK distribution industry has died aged 88.

He formed Aerco (Aviation Electrical and Radio Company) in a small, wooden workshop in Horsham in 1956. Initially installing radio equipment into aircraft, the company rapidly developed its engineering and technical capability and a stock-holding and distribution service.

Bill handed over the running of the company to his son, Rob Laughton, in 2000 but was in no mood to step away so he concentrated his energies in setting up in Aerco a co-axial sourcing service to help customers overcome delivery problems on coaxial connectors.

He worked every day until the week before he died and saw Aerco develop into a major specialist electrical and electronics distributor with an annual turnover in excess of £13 million.

He was one of a select band of trailblazers that included Fred Lane of F C Lane, George Stuart of Sasco, Alf Pegg of AWP, and Cyril (Lofty) Freeman who at that time was at Richfield Electronics. All these entrepreneurs formed companies in West Sussex and went on to run successful and long-lived businesses. 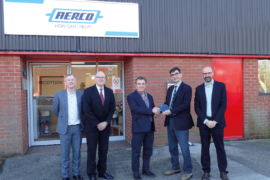