Astute Electronics is continuing its push into franchised distribution by launching an electromechanical division which commences operations boasting a raft of suppliers covering many connector technologies.
In keeping with Astute’s business model the new division will focus its efforts on customers in the military/aerospace, oil and gas, other harsh environment applications as well as medical and security where product compliance is paramount.
Industry veteran Gary Evans will head up the new division. He has held sales and marketing roles in a myriad of connector specialists including Deutsch, ITT and Harwin.
“We will be a demand creation distributor for our principals,” said Evans. “Our field applications engineer team bring years of connector experience.”
Evans and Astute Electronics Managing Director Geoff Hill have been meticulous in their choice of suppliers going for a rich mix of well-known manufacturers – Amphenol, Weidmuller, Delphi and Positronic allied with lesser known, under distributed companies including AirBorn, XiOptics, Quell and Fischer Connectors.
The Weidmuller and XiOptics agreements commence in January 2015.
Both Fischer Connectors and AirBorn are new to the UK distribution channel. AirBorn is an employee-owned company that manufactures backshells and accessories. Based in Texas it also has a facility in Tonbridge, Kent.
Astute has signed a pan-European deal with Quell which spans the continent apart from Germany.
Evans is particularly excited about bringing the company’s innovative range of filter seals which are based on a new EMI filter technology.
With this line card Evans feels Astute has a large sector of the market covered. “We are looking to sign an RF connector line,” he adds.
The electromechanical division joins Astute’s existing semiconductor division which has agreements including Linear Technology, Semtech and Datel serving what Geoff Hill describes as the MASH (Military, Avionics, Space, Harsh) market.
These divisions sit alongside Astute’s component brokerage business, which is also focused on military, aerospace, oil and gas and other harsh environments.
The company which was founded in 1989 has a turnover of $65m. 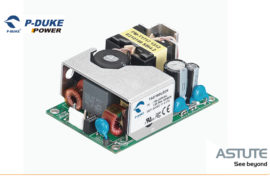